Almaty region is located in the southeastern part of Kazakhstan. In the Kazakh language, Zhetysu means seven rivers. Kazakh poets were inspired by this place. They called it the heaven on the earth and it’s not without a reason. This place is so different from other parts of Kazakhstan, that it seems like an amazing oasis, hidden in the Asian steppes.

In this tour, you will see fascinating Alatau mountains, reveal the secrets of Charyn Canyon and admire the view of high lakes. Need more? Singing sand dunes, red mountains, mysterious rock paintings are waiting for you.

Discover hospitality of the south city

Almaty is the largest city in Kazakhstan, where living about 9% of the country’s population. It also used to be the former capital of the country, until 1997 when it moved to Astana. The city has many interesting sights worth to visit. Almaty region is a must visit place for first-time visitors of Kazakhstan.

Big Almaty Lake, 30 km from Almaty, is located in the gorge of river Big Almatinka, at height of 2511 m above sea level. The lake is in a hollow, surrounded from different directions with mountain tops.

Reveal the secrets of Charyn Canyon

The Charyn Canyon has the length about 150 km and in some places, depth is going up to 300 m. Here is situated Valley of Castles, that due to the pillars and rock formations forming imposing, almost man-made structures.

According to legend, the merchant Baibosyn, who drove the caravans along the Silk Road, stopped here for the night and stuck his staff into the ground. And when he woke up, he found a young seedling in place of the staff.

Altyn-Emel is a national natural park located in the Ili River Valley. The Park was founded to preserve a unique natural complex with archaeological, historical and cultural monuments, rare and endangered species of animals and plants. The Park has a total area of 520,000 ha.

Almaty sightseeing with the visit of the highest point of Almaty – Ski resort Shymbulak. Then we will go to Big Almaty Lake. It can be seen from rather rare angle from the top of the Skalistiy peak (also known as Tumba), 3320 m above sea level. We will need to make grueling ascent and descent through high grass and rocky terrain but it totally worth it.

On the way back to Almaty, we can stopover at Sunkar falcon farm where at 5pm starts Falcon show. Five different kinds of birds including golden and bold eagles, owl, vulture and falcon will demonstrate their hunting skills under the guidance of a professional trainer. The show lasts for 40 min and during it, the trainer tells public about bird’s habits and hunting specifics.

This falcon show takes its roots from many thousands years ago, when ancestors of nomadic people hunted with golden eagles in the vast steppes. This hunting is one of the unique features of Kazakh culture.

We will drive to Saty village which is located on the territory of Ili-Alatau national park in close proximity to mountain lakes Kolsai and Kaindy. Upon arrival to Saty village, you will accommodate at one of its guesthouses and then will go by car or horse to visit Kaindy lake where you will see how the pine trees stay green inside the water for hundred years. While going to Kaindy lake you will be enjoying the views of green pine trees standing firm on top of  Alatau mountains. And as we do, you can also enjoy eating wild strawberries that grow there.

Dinner and overnight in the guesthouse.

Breakfast at 08:00am. Transfer to Charyn canyon.

We will visit Charyn canyon, which is described as the Grand Canyon’s little brother.  After spending time in Charyn you will stay for a night in a guesthouse, which is located in an area that famous because of its mineral hot springs. You will be amazed how it is comfortable and relaxing it is there. But if you want to enjoy stargazing during the night at Charyn canyon, you can also stay overnight in nomadic yurta just in the middle of Charyn canyon.

Next destination is Altyn-Emel National Park, on a way we will see “1000 year old tree” Ash Grove tree.  The view of 1000 year old growing in the middle of the steppe is really amazing. This is oasis that you wouldn’t expect to see in the steppe.

After spending time in the oasis, we drive to see a unique phenomenon of the nature – Signing Sand Dune which is 1.5 km long and 120 m high.  You will definitely enjoy climbing the sand dune from top of which you can observe the panorama of the surroundings. In the north – violet-blue ridge of Djungarian Alatau mountains, in the south – thin strip of the Ili River is visible.

Dinner. Overnight in the guesthouse.

Drive to see red and white colored mountains called Aktau-Katytau mountains. Here you can do everything hike, take lots of amazing photos trying to capture mountains from a perfect angle or even sunbathe. Under the mountain shade we will have a picnic with lunchboxes.

From Aktau-Katytau will drive to Besshatyr burial mounds also known as Kazakhstani “Stonehedge” and get acquainted with an ancient culture of Saco tribes also know as Scythian tribes.

From Altyn Emel nature reserve we will drive 110 km to Ili river where you can take a boat trip on Ili river to admire rocks where engraved pictures of Buddhas. On the opposite site of the river, there is an ancient medieval city built for the movie “Nomads”.  Here you will learn how ancient Silk Road towns looked like. In the afternoon departure to Almaty.

End of the tour. 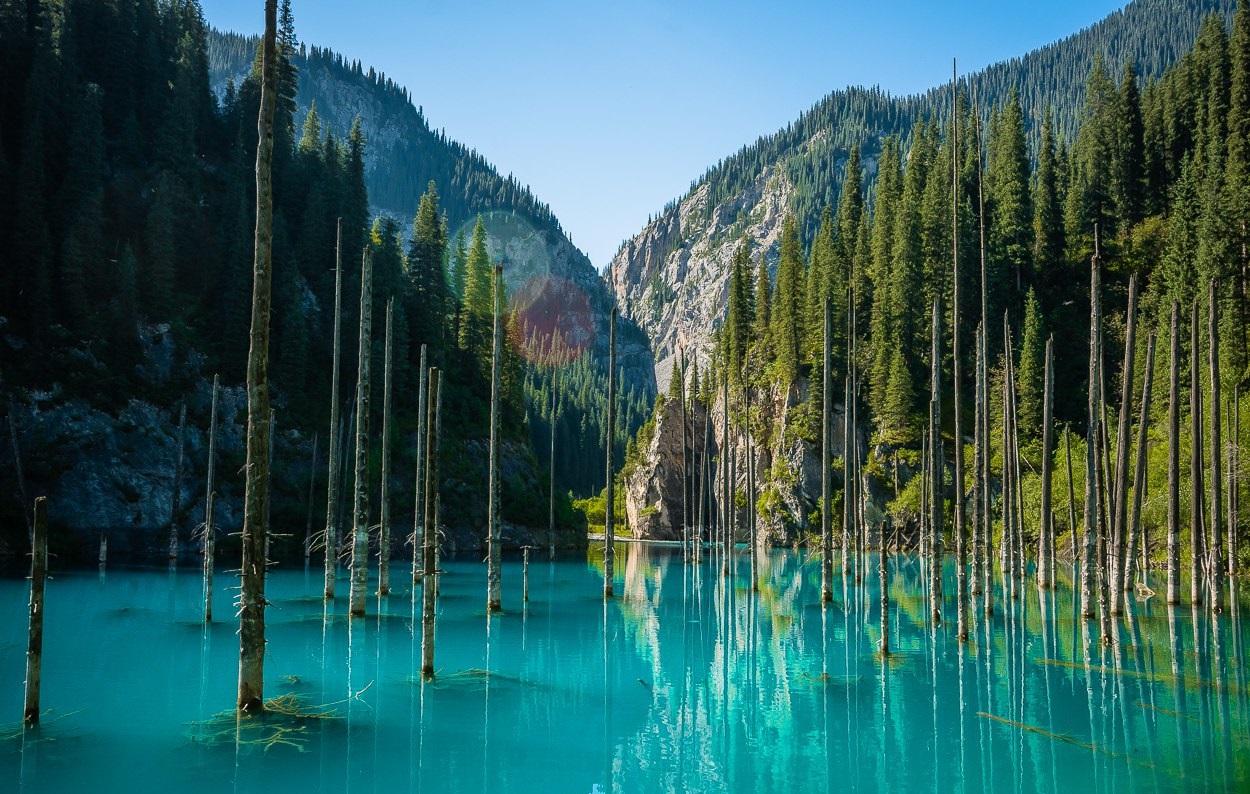