Karaganda is one of the biggest cities of Kazakhstan. It is the city of coal,  where coal mining and the production of coal-mining machinery still dominates over others.

During the city tour, we visit the sights of the old town. Namely, the monument of the first astronaut Yuri Gagarin, the Mosque, Catholic Cathedral, Orthodox Church. Also, we visit “The Memory Museum of Victims of Political Repressions”. It is located in the building of the former administrative center of «Karlag» in Dolinka village.

In Karaganda, you can meet beautiful buildings from the Stalinsk era. Despite that, the appearance of administrative and cultural buildings changed and also modern shopping malls and cinema theaters opened. While walking along the city avenue you can feel the remains of the USSR time.

Also, we have the excursion to Karaganda Ecological Museum.  In addition to the museum activity, EcoMuseum performs innovative projects to develop alternative energy.

Karaganda region is once better known for Stalinist camps. These camps cooped workers of culture and art. Josef Stalin has organized a hundred camps in the period of mass political repressions. “Karlag” was one of them. Karlag means Karaganda Corrective Labor Camp of The People’s Commissariat of Internal Affairs. The Dolinka village is an administrative center. The camp system was enormous and had other departments in Central Kazakhstan. The center in Dolinka was responsible for the control over slave labor of the political prisoners.

In Dolinka we visit “The Memory Museum of Victims of Political Repressions”, which located in the building of the former administrative center of «Karlag». The construction amazes with its beauty, which was built by forces of thousands of prisoners. The building has Greco-Roman style, with columns that gave it a formidable, majestic character.
In the museum, the themes of the policy of forced collectivization, as well as gloomy years of political repression, are revealed. There is an exhibition of originals, copies of documents, photographs, voluminous items, a map testifying to the repressive policy of the Soviet state. 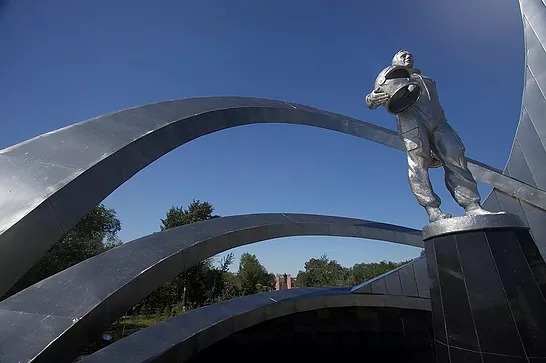