Otrar and Turkestan whole day tour takes place in several oldest historical sites of Central Asia. City Otrar is the birth place of medieval philosopher and scientist Al-Farabi, and Turkestan is the burial place of the poet and preacher Khoja Ahmed Yasawi. His mausoleum is a masterpiece of medieval architecture, which has become one of the main worship places of Muslims.

Furthermore, in 2003 UNESCO included Mausoleum of Khodja Ahmed Yasawi to the list of the World cultural Heritage.

During this day tour you will find out why the mausoleum was included in the UNESCO list, dive into the atmosphere of medieval city which used to be the capital of Kazakhstan. And did you know that in old European maps of 18-19th century current territory of Kazakhstan was identified with Turkestan?

First of all, the tour starts from Otrar oasis and continues in Turkestan city. Do you want to learn more about Otrar oasis?

Up to 19th Otrar was an important trading center of the Great Silk Road. It was a very advanced city with its own irrigation and waterpipe system. Otrar was famous all over Central Asia and China for its pottery and glass workshops. In 2001 during the excavation works in Otrar archeologists found silver coins with origins belonging to Bukhara and China.

Consequently, after exploring Otrar oasis, before reaching Turkestan, we will visit Arystan-Bab mausoleum. A few words about Arystan-Bab so that you could understand why this is a Must visit place.

Finally, the last destination of this Otrar and Turkestan whole day tour is Turkestan city.  There, besides, the mausoleum itself you will visit medieval Hammam, Citadel with gates, Hilvet underground mosque. But of course  as proverb says “Better to see something once than to hear about it a thousand times” so please book the tour!

Price includes:
1. Shuttle service (from and to hotel)
2. Transfer service for 1 day tour
3. English speaking guide service during the tour
4. Entrance fees during the tour
5. Drinking water 1L per person per day

During the excursion at Otrar tourists will find excavations on the site of an ancient city that helped researchers to learn a lot about the infrastructure of the city. Tourists will be able to see that Otrar had a clear layout of the streets, quarters, which could be accessed through three fortress gates, equipped with throw-over bridges across the moat.
Excursion at Shaulder museum where gathered most of Otrar’s excavational findings; on the way to museum visit Arystan Bab mausoleum.

After visiting Arystan-Bab mausoleum we will depart to Turkestan city (95 km).

Turkestan visit starts with the main sightseeing of the city, the most well-known in Kazakhstan UNESCO world heritage – The complex of Hodja Ahmed Yassawi (14th century). This complex includes mausoleum, citadel, the ancient bath complex, the fortress wall, Juma mosque. The mausoleum of Khoja Ahmed Yassaui is an unsurpassed masterpiece of medieval architecture. This is an amazing complex of palaces and temples from 30 different rooms and halls.

After excursion in Turkestan city, transfer back to Shymkent city 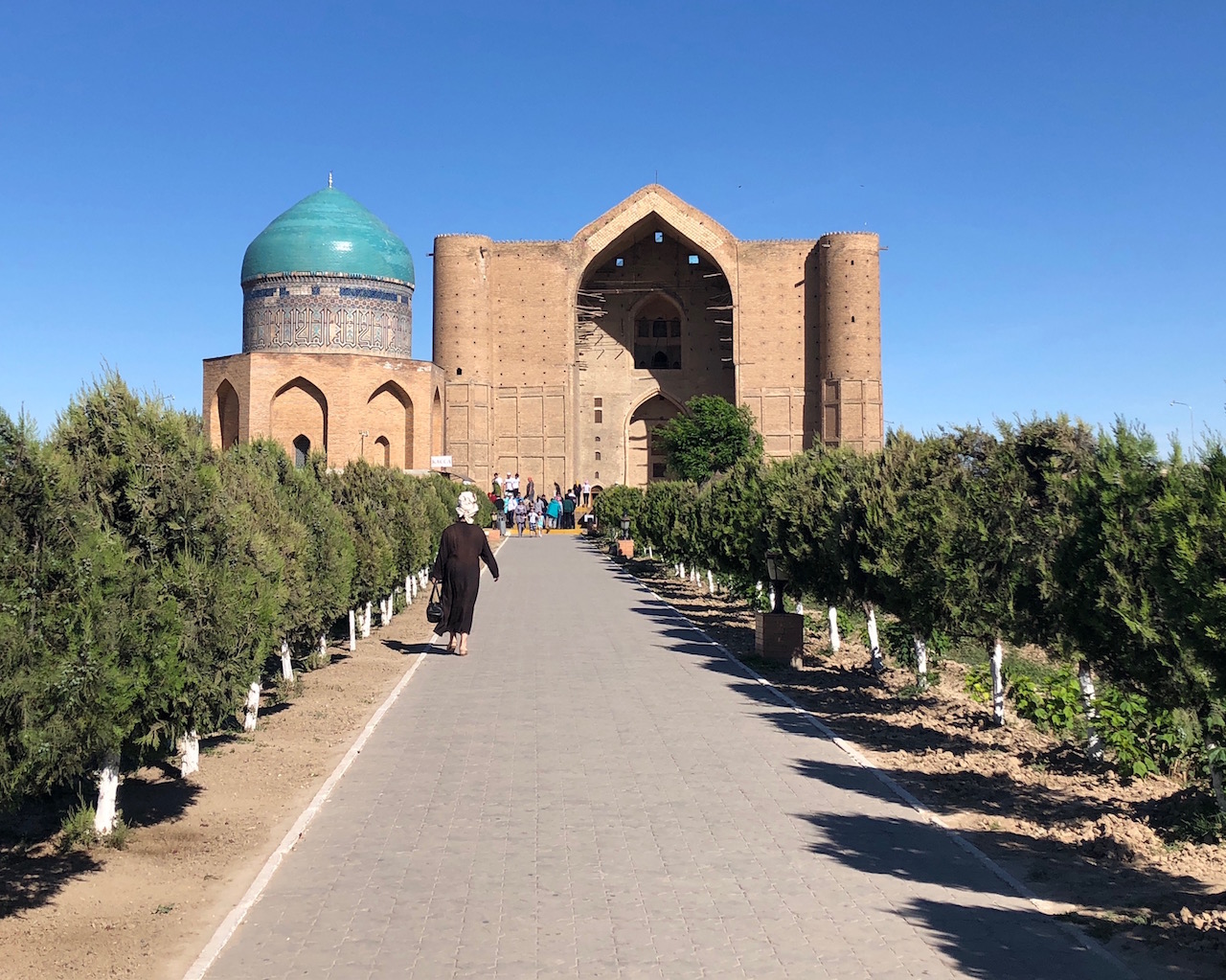