Long ago there was the area that once was the Aral Sea, the fourth largest lake on earth. From the 1960s onwards, the then Soviet Union diverted the two main rivers that were feeding the lake in order to implement massive irrigation projects, in particular to grow cotton (a very thirsty plant!). While this brought shorter-term prosperity, the longer-term effects were devastating. The lake shrunk. And with it the salinity of its waters went up, killing the fish in the lake and hence the fishing industry of towns like Aralsk. Now there’s less than 10% of the former area of the Aral Sea left, split into separate bodies of water. Where there was once water rich in fish, extends a new desert, the «Aralkum».

Arrive in Almaty. Transfer to the hotel and overnight.

After breakfast depart to Almaty city excursion “Grand Tour on old capital”. The tour starts with sightseeing in the central part of Almaty. You will know more about history and development of the southern capital of Kazakhstan and see its major attractions: Central State Museum, Palace of President, Republic Square and Monument of Independence, Abai Opera and Ballet Theatre, Astana Square, Almaty Railway Station, Central Mosque, Panfilov Park, Abai Square and Palace of Republic. You will visit one of the oldest Almaty parks — Panfilov Park, where you will know more about the history of the city and see one of the highest wooden building in the world — Zenkov Cathedral. You will also visit the Memorial of Glory and Eternal Flame, dedicated to the memory of the fighters who died for freedom and independence of the country. Excursion to Kok tobe Mountain via cable car. Kok-tobe — is a mountain on the south-eastern outskirts of Almaty, at the elevation of 1130 meters above sea level. It is also the name of the popular recreation area on the top of the mountain. The Kok Tobe recreational area has a variety of amusement-park type attractions and touristy restaurants, as well as a number of good viewpoints. It is connected to downtown Almaty by an aerial tramway line; its city terminal is near Hotel Kazakhstan.
Meals: breakfast, lunch, dinner

Next morning at 6.30 am, the Guide will pick up tourist at a hotel lobby and drive to the airport for a flight to Shymkent at 7.35 am. Guide will meet tourists at a hotel lobby for Shymkent city tour, where tourists will visit the main sightseeing spots of the city and the largest historical-archeological museum in South-Kazakhstan called “Shymkent historical-archeological museum”. Museum was founded in 1920 and contains a collection of 60 000 archeological memorials, excavations found during the excavations of ancient cities. After the lunch, tourists will drive from Shymkent to the village Kazygurt. There are many legends that surround this village– which is considered a Holy place for Kazakhstani. Upon entering the village, tourists will meet with Shyrakshi — keeper of a Holy place, who knows all about this place and will show them different sights. At the footsteps of Kazygurt Mountain, there is Stone that looks like a camel which is called “Akbura” (White camel). After Kazygurt, tourists will transfer to Camel farm (10 min ride) where they will have a chance to participate in feeding camels, try camel milk called in kazakh language “Shubat” and will see how woman make wool clothes from camel’s hair.
Meals: breakfast, lunch, dinner

Next morning the Guide will pick up tourist at a hotel lobby and drive to Sairam. Sairam (ancient name Ispidjab) is one of the most ancient cities in Kazakhstan, part of the Great Silk road. Sairam is called a city of 1000 mausoleums because almost every second house has a mausoleum or mosque adjacent to their house. Tourists will have a lunch in Sairam and then from Sairam drive to ancient city Turkistan. On the way to Turkestan tourists will stop and visit ancient Silk Road oasis, Otrar also known as Farab (1BC-15AC) that was an important trading center of the Great Silk Road and the capital of the Great Tamerlan in 15th century. From Otrar tourists will drive to Mausoleum Arystan bab (14th century AC) and then to mosque Arystan bab. Arystan bab was a religious mystic and a teacher of Khoja Ahmed Yassawi.
Meals: breakfast, lunch, dinner

Next morning Guide will pick up tourists at a hotel lobby at 9:00 am and start City tour, where they will see following: Turkistan city walls (12th c.c.) with the Gates called (Darvaza) 19th c.c. Historical and architectural complex of Khodja Akhmed Yassawi (12-14 c.c.), that consists of mausoleum of Yassawi, mosque, library, celebration hall. Esimkhan mausoleum (XVI c.) – Esimkhan was khan of Kazakh khanate & one of the most power military general that managed to expand territory of Kazakh khanate & conquer Tashkent. Rabii Sultan Begim (Sultan Begim) mausoleum (15 с.с.) is dedicated to the daughter of ruler of Central Asia – Ulugbek & wife of famous Kazakh khan Abulhair. After lunch transfer to ancient fortress Sauran (12-18.cc), that was a strategic and trading city and from 12th to 16th c.c. capital of Kazakh-Mongol khanate – Ak Horde. Return to Turkistan, taking night train to Aralsk.
Meals: breakfast, lunch, dinner

In the morning tourists will arrive to Aralsk city (a former Aral sea harbor at the northern end of Aral sea). Guide will meet them and drive them to the guesthouse which is actually a homestay. After a breakfast and a short rest follows an excursion at Aralsk, where tourists will visit: Ship museum, fish processing factory “Kambala Balyk Tuz” and salt factory called – Aral-tuz, salt is exported to Central Asian countries, Russia, China. After excursion in Aralsk, tourists will transfer to the Zhalanash ship graveyard. Upon arrival to Zhalanash village, tourists will rest and have refreshments at the house of Kazakh fisherman, try Camel milk called “Shubat” at a small camel farm kept by t fisherman. After refreshments, Tourists will be transferred to Ships Graveyard. At fisherman’s house, tourists can take camels and with a Guide ride on camels from Zhalanash village to Ships’ Graveyards. From Ship’s graveyard, tourists will be transferred further east to Aral Sea in order to see emerge of water at the Aral Sea.
Meals: breakfast, lunch, dinner 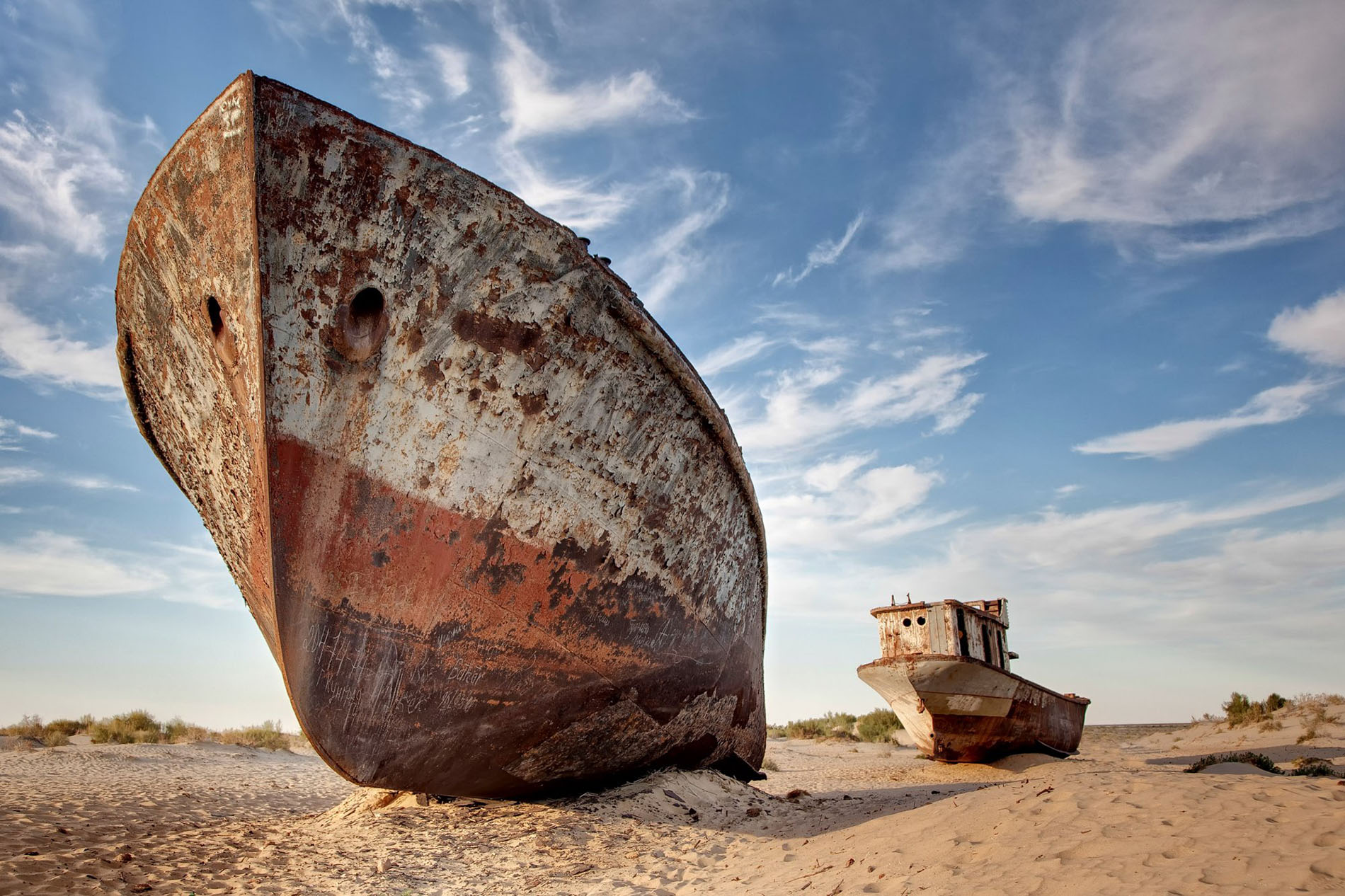