Back to the USSR: Nur-Sultan, Karaganda

During the “Back to the USSR” tour in Karaganda you will see “Stalinka” (named after Stalin) buildings, gigantic Soviet themed murals, learn how Karaganda is very much connected with Baikonur cosmodrome. You will dive into Sovietic times on Lenin avenue, see unique museums like Ecomuseum, learn of the past horrors of USSR times in Karlag labour camp-museum and Spassk cemetery-memorial. Basically this is your Must Do tour in Kazakhstan!

Private tour price for one individual is 375 USD

Tour price in a group of 2 or more people: 210 USD per person

In the morning, at 9:00am meeting with the driver at the hotel lobby in Nur-Sultan city (Astana) and transfer to Karaganda (c.2-2.5 hours by car). Upon arrival to Karaganda, you will meet with our English-speaking Guide who will be leading you through this 2-day tour. (It is also possible for the guide to accompany you from Nur-Sultan to Karaganda).
Our first day will start from the Palace of Culture of the Miners, which can reasonably be called one of the symbols of Karaganda as it is dedicated to the miners that have basically founded Karaganda. It’s roof is decorated with statues of Soviet workers of different nations that used to live in the USSR and symbolizes the friendship of Soviet nations. Soviet-made “”Monument to the Fallen miners”” speaks of the great importance of coal and its mining to the city.
Next stop on the tour is Karaganda Regional History Museum, which is the largest museum in the Karaganda region. This museum is one of the best in Kazakhstan if you want to learn about the Soviet times. There are many halls that are dedicated to the Soviet times, there are many unique Soviet posters like the one “Quiet, Don’t Blab!”. This museum gives a good introduction to the next day of visit to Karlag and also tells a sad history of Soviet repressions and about the famine of 1930s during which millions of Kazakhs died.
After lunch, you will learn about the connection of Karaganda to the Soviet times of exploration of space. Our first stop will be hotel “Chaika” with it’s historical importance presentation. Next stop is Ecomuseum, probably the most unique museum in the former USSR. At first sight this museum might seem even boring but with the narration of our Guide you will understand what do those indefinable objects mean, just remember that they can truly be connected to the outer space and Baikonur cosmodrome.
During this tour, you will also see the most majority of Soviet monuments like monuments of Lenin and Gorky, our favorite monument to Soviet hero Nurken Abdirov who was a World War 2 pilot, will find a huge mural of Soviet woman with Sickle.

Karaganda is also particularly famous for its Soviet-themed cosmonaut statues.
The last stop of the first day will be Cathedral of our Lady Fatima, the largest catholic cathedral in Central Asia. Its history is directly linked to the prisoners of the Karlag labour camp

After the breakfast you will be transferred to the village Dolinka (42 km) where The Museum of the Memory of the Victims of Political Repressions, also known as Karlag, is located. Opened in 2002, it contains the facts about the tragic fate of thousands of prisoners affected by the policies of the Soviet regime.
Karlag labour camp or Karaganda Penitentiary Labour Camp of the Nation’s Commissariat of Internal Affairs of NKVD used to be one of the many Penitentiary Places of the GULAG system created by the order of Josef Stalin. The peculiarity of the Karlag labour camp is that it was the one of the largest camps in the USSR, stretched for several hundred kilometers. Over 28 years of existence, more than million people have passed through the Karlag. These people built the industry of Central Kazakhstan, primarily the Karaganda coal basin.
Upon arrival to Dolinka village, before entering Karlag memorial museum, we will first visit Children’s cemetery also known as “Mammie’s cemetery” where thousands of babies of prisoner’s women are buried. It is a horrifying place to be still up to nowadays. After the cemetery we will proceed with the tour to the Karlag memorial museum where you will see and learn many things about the prisoners among whom were also Nobel Prize nominees. Being quite vivid the installations of the insulator, the punishment cell – basically a hole in the floor with metal grille on top, the division pit, the torture chamber with realistic mannequins of prisoners and Soviet officers make a non-forgettable impression.
After Karlag we will proceed further to the Spassk village (35km from Karaganda) where the Spassky memorial is located.
Spass kused to be another labour camp under the Gulag –Karlag system of camps with a particularly high rate of detention of foreign war prisoners during the Second World War. The camp is infamous for being extraordinarily brutal and with a particularly high death rate. Today, in Spassk there is no labour camp left but there are memorials of those prisoners who used to sit in the Spassk labour camp.
Each memorial stone has its own design reflecting or portraying the nations that the camp’s prisoners had come from.
Countries that erected memorials:
Germany, Hungary, Japan, Korea, Italy, Russia, Poland, Romania, France, Finland, Lithuania, Ukraine, Belarus.
Historians estimate the number of prisoners of war buried in Spassk as of 5152 people of different nationalities.
Upon the end of this tour,we will transfer back to Nur-Sultan (c.3-3.5 hours by car). 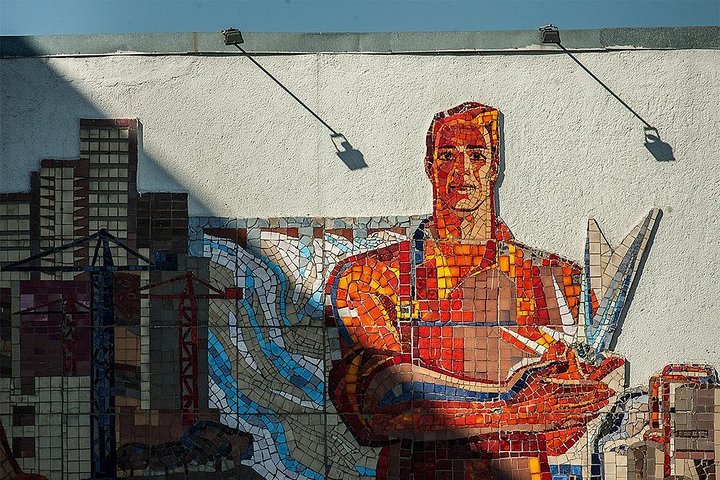