6 days
Duration
May to October
Season

The Great Silk Road played a major role in the development of economic and cultural relations of the peoples of Asia Minor, Central Asia, the Caucasus and China. It also served as a corridor for technological, cultural and religious exchange.

In 2014 UNESCO has added eight settlements of the Great Silk Road located at the territory of Kazakhstan onto its World Heritage List. Hence the name was the Routes Network of Changan-Tian-shan Corridor. This tour will allow you to get acquainted with 3 objects of Kazakhstani Silk road included in the list of the UNESCO heritage list and also with the oldest nature reserve Aksu-Zhabagly which will fascinate you with its remarkable nature.

Aksu-Zhabagly nature reserve – is the oldest and most famous nature reserve in Central Asia. Year of the establishment is 1926. Its aim was to preserve endangered wild animals and abundant flora and fauna of the reserve. The nature reserve is located in the spurs of the Western Tien Shan at an altitude of 1000 to 4280 meters above sea level. In 2016 the nature reserve was included in the UNESCO list of the World Biosphere Reserves. The highest peak is Sairam Peak, its height is 4238 meters.

The name Aksu-Zhabagly contains names of two main rivers Aksu and Zhabagly. These rivers flow through the reserve. Aksu is the longest river, covering 120 kilometers. In the spring the Aksu River is blue. However, in the summer months, it turns to a color of milk. Hence, its name comes – Ak – meaning “white” and Su meaning “water”.  Aksu canyon, carved by the mighty Aksu river, is one the deepest canyons in Central Asia. The depth of canyon fluctuates from 300m to 500 meters, the length is 30 km.

Almaty sightseeing with the visit of the highest point of Almaty – Ski resort Shymbulak. Then transfer to Big Almaty Lake.

Big Almaty Lake, 30 km from Almaty, is located in gorge of river Big Almatinka, at height of 2511 m above sea level. The lake is in a hollow, surrounded from different directions with mountain tops. Gorgeous Big Almaty lake can be seen from rather rare angle from the top of the Skalistiy peak (also known as Tumba), 3320 m above sea level. We will need to make grueling ascent and descent through high grass and rocky terrain but it totally worth it.

Drive to Saty village which is located on the territory of Ili-Alatau national park in close proximity to mountain lakes Kolsai and Kayindy. Upon arrival to Saty village, accommodate at one of its guesthouses and then driving by car or riding a horse move to visit an unusual in its form Kayindy lake where you will have chance to ride on a boat among tree peaks.

The Kaindy Lake is located in a middle of a coniferous forest 1867 meters above the sea.

It is famous because of its origin. The lake was created in 1911 during the huge earthquake – it was a historical moment for region. The earthquake created a natural dam which blocked the water and created a mystical view. Most of the spruces, being surrounded by mountain water, are preserved perfectly because of the coldness of the lake. That’s why spruce stems stay there like masts of the sunken ships. The water of Kaindi lake is so cold (even in summer the temperature does not exceed 6 degrees) that the great pines still remain on the trees even located inside the water. The water of the lakes is so clear that while riding a boat there, you can see deep into the depths of the lake.

Transfer to Charyn canyon which can described as the Grand Canyon’s little brother.

The Canyon itself is approximately 150 km long, and, in places up to 300 meters deep. One area of particular interest is an area of 2km called the Valley of Castles, due to the pillars and rock formations forming imposing, almost manmade structures.

During the visiting Charyn canyon you will enjoy a stunning view of a huge gorge with cliffs and rocks of various colors. The canyon is a part of the Charyn National Park territory and you will have an opportunity to see the Castle Valley, one part of 154-meter canyon with cliffs resembling towers. Despite a long way to go, the beauty of the Canyon will make you forget long hours of drive and this sight of nature in Kazakhstan will stay long in your memories.

After the time spent in Charyn you will stand all the night in a guesthouse, which is located in an area which is famous because of its mineral hot springs. You will be amazed how comfortable and relaxing it would be to try one.

According to legend, it was in this place that the merchant Baibosyn, who drove the caravans along the Silk Road, stopped for the night and stuck his staff into the ground. And when he woke up, he found a young seedling in place of the staff.

Altyn-Emel is a national natural park located in the Ili River Valley. The Park was founded on 10 April, 1996 to preserve a unique natural complex with archaeological, historical and cultural monuments, rare and endangered species of animals and plants. The Park has a total area of 520,000 ha.

During Altyn Emel sitghseeing we will see a unique phenomenon of the nature – Signing Barchan Dune which is 1.5 km long and 120 m high. While the wind is blowing from the West dispersing the sands, one has a feeling that the pipe organ is playing in the heart of the desert.

Drive to see red and white colored mountains called Aktau-Katytau mountains. These mountains are famous for its unique appearance, which was probably created by small volcanoes, erupted and immediately cooled down several thousand years ago.

Besshatyr is complex of Saco mounds, which is a historical monument ((he 12th -11th centuries BC)

and heritage left by great nomads of Central Asian steppes. In total there are 18 royal burrows from 8 to 70 meters in diameter, and from 2 to 20 meters in height are concentrated in the area of 2 sq.km. A chain of 45 immovable stone fences lies to the West of the royal tombs from North to South, on which drawings of animals are carved.

From Altyn Emel nature reserve we drive 110 km to Ili river where you can take a boat trip on Ili river. There are few sightseeing spots you can enjoy while riding the boat on Ili river: rocks with unique pictures of three Buddhas engraved on the rock (dated back to 14th -16th century), the hight of the highest Buddha 400 meters. In total, there are 18 rocks with engraved on it signs, including three Buddha images on one rock and two images – on the others. 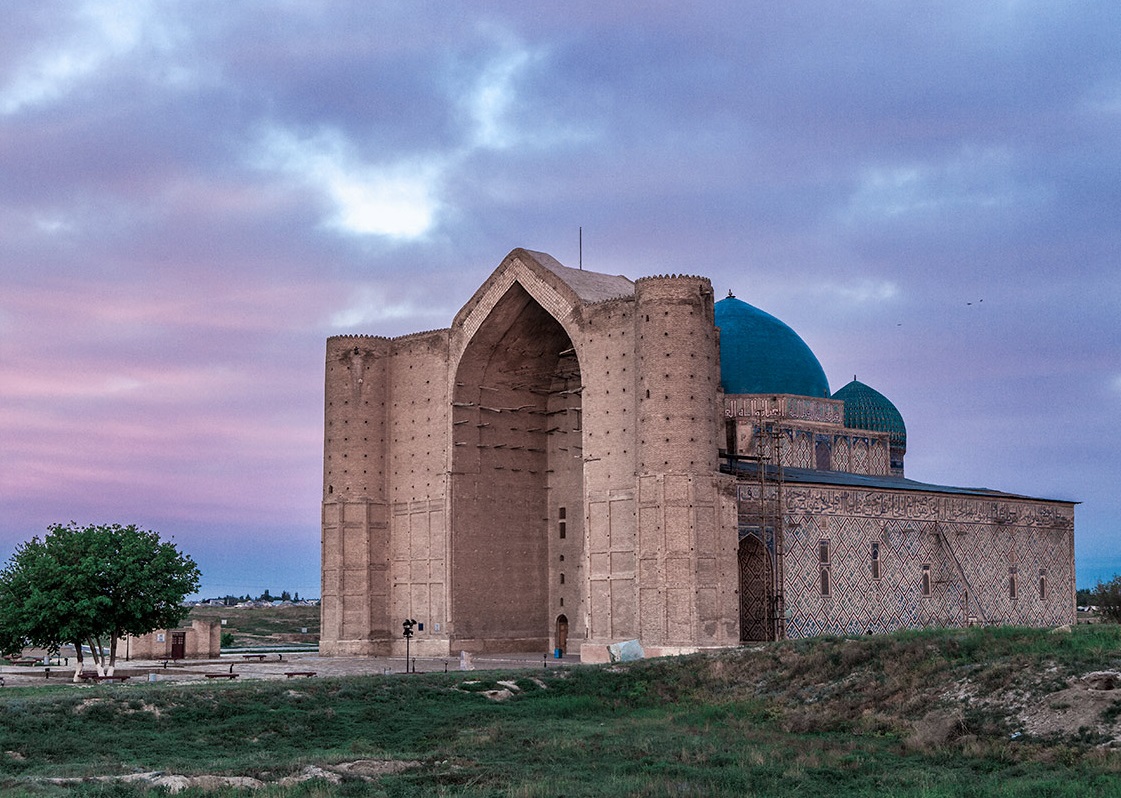