The wondrous region of Mangistau seemingly comes out of sci-fi movies or otherworldly adventures. Where once an ancient ocean Tethys seethed and reigned, now vast lands covered in a salt spread as far as an eye can see. Nature used Mangistau as its workshop carving cliffs with wind and rain, painting them with multicoloured chalks. And the jewel of such work is Karyn Zharyk, a depression, the bottom of which is covered in salt-marshes that make the mountains seem to float on a cloud. Even the animals that roam Karyn Zharyk are one of a kind: the Saiga antelopes that you will meet only steppes of Central Asia and Argalis. Endangered species hide from the eyes of people, but with luck, they can be seen in all their glory.  These unique panoramas leave a trace in every traveller’s heart.

But Mangistau is not only a masterpiece of nature but a land filled with human creations striking in beauty and wisdom. Underground mosques, historical monuments and remnants of forgotten civilizations are hidden among cliffs and valleys, during this tour you will able to listen to the echoes of history in an underground mosque Beket-Ata. And of course, you will be able to explore Tuzbair lake “Salty Walls”. Having a walk on the surface of the lake as if you are a hero of old legends possessing powers mentioned in Bible, and look at the water under you feet separated by a seemingly thin layer of salt.

In the morning upon arrival to a sea-port city  Aktau, a transfer provided to Zhana Ozen (165 km) via Karagiye hollow. Reaching 132 meters in depth, Karagiye Depression is the lowest point in Central Asia, Kazakhstan, and the former Soviet Union, full of flora and fauna despite it a seemingly deserted look.

After an ascent to the eastern slope of the valley in 11 km we reach a beautiful observation deck of the Sautta natural boundary.  In antiquity, a spring bubbled on a vast shelf under the rocks and nomad camps settled in this beautiful place.

In Zhana Ozen we drive to a hotel, have dinner and overnight.

After breakfast at the hotel, we will drive to see Tuesu sands, solemn and beautiful. After admiring the dunes, the journey continues to Bokty mount, red from the chalk that covers it.  We further drive up to the Baisara Collonade – the precipice of South Aktau in a shape of a huge horseshoe. We descend 20 km southeast on the outer side of the cliff to a broken grader road leading to the village Akkuduk where ancient settlement is still visible.

Further, the dirt road along the picturesque sand dunes overgrown with saxaul leads to the south. After another 60 km, we turn to the east, where the Three Brothers cliffs stand proud. Here, on the southern tip of the Karyn-Zharyk hollow on the bank of a salty stream is the cordon of the Ustyurt reserve.

We organize overnight stay at the highest point of the Ustyurt cliff.  If we do not make noise, grazing argali are visible on the slopes of the depression.

After morning photography, our path goes north along the Ustyurt valley to the Karyn-Zharyk depression. A spectacular panorama of Karyn Zharyk, a land of salt that seemingly jumped out of a magical book, opens up to you. Once nomads lived on this land, but now there is no one, except for lonely mazaars (graves) standing on the edge of a cliff.  The combinations of white and pink chalk against the blue surface of the litter transport you to an other-wordly landscape.

On our way, we pass along the gorge Kogusem, the slopes of which are painted red with ocher clays being eroded by rain for more than one millennium. As we travel in this region we can see a fanged rocky ridge of Karamay on the bottom of the salt marsh named Kenderliser. Their marine fossils are hidden among the sandstones, even petrified whale bones! We drive through the northern cordon of the reserve at the foot of Karamay and set up tents for a night under blinking stars

After breakfast we will be driving to Boszhira valley, which is somewhat similar to the USA’s Monument Valley. We will make stops to various vantage points for the best views of the striking landscapes.

After lunch we will do 2 km trekking (2km one way) up to the Dreadnought Cliff from which opens an amazing view on the whole valley and especially adjacent rock with its three peaks rising from the plateau creating an image of castle like structure, this is a true Alien looking landscape reminder of the ancient ocean Tethys that used to reign here a million years ago. All the photos taken there are guaranteed to be striking!!

On the way back from the Dreadnought you will see mountains, which were given names as Yurta-tau mountain and Bastion due to its resemblance of mentioned objects.

Afterwards, our road leads us from natural wonders to wonders human. An underground mosque Beket-Ata built in the 18th century by a holy Sufi man is full of history and ancient wisdom. Some believe it was used as an observatory to track the movement of stars. Entrance is not easy to get to and requires a 1 km walk.  Despite a far hard-to-reach location, Beket-Ata mosque is an important site of pilgrimage for local people.

Accommodation can be either Pilgrim house near Beket Ata mosque or tents. Breakfast, Lunch and Dinner prepared by our Guide.

After breakfast, our journey continues in the north-west direction along the Ustyurt Cliff up to Tuzbair lake. We will be driving on salt marshes where only wild animals and reptiles survive in these deserted lands. After 60 km, our path comes close to the chalk walls of Ustyurt, where once again we witness the grandiose power of nature. The view of the dazzling white rocks is astounding. Here nature has created another miracle – a grand white arch which we will definitely climb in order to have a view on the whole Tuzbair lake from above, you will once again be amazed with the views that will open your eyes and wonder how could this lake survive in a deserted area. The lake itself reaffirms to us the existence of Tethys ocean on this place.

After lunch, comes time to explore Tuzbair lake.  Seated between two white mountains covered in salt, the lake gets its name from them translating from Kazakh as “Salty Walls”. We will walk 2 km on the salty surface of the lake creating an illusion of walking on top of the water. People might not believe photos of you walking on the lake like in biblical stories, but they will be no doubt be impressed.

If there is enough energy and strength, it is possible to hike the plateau, where stands a rock surprisingly resembling the Sphinx at the pyramids of Giza.

In the afternoon we will depart to Aktau and transfer to the airport or to the hotel.

Breakfast, Lunch prepared by our Guide.

Private tour price for one individual is 1935 USD

Price includes:
1. Meeting and transfer from and to the airport
2. Double accommodation in 3 * hotel in Zhanaozen on Day 1 (Temirkazyk hotel or similar)
3. 5-day Jeep tour on 4 WD off-road vehicles with air-conditioning in a group (max 3 people in one car)
4. Tour will be conducted by professional English speaking Guide-Driver or Guide driver with English interpreter;
5. Meals: Day 1: Dinner; Day 2: BLD; Day 3: BLD; Day 4: BLD; Day 5: BL.
6. Accommodation in a tent from Day 2 to Day 5. Besides tents we also provide sleeping bags and mats
7. Entrance tickets and permission to Ustyrt Nature Reserve
8. Drinking water 1,5 L per person per day

Price excludes:
1. Meals not indicated in the program and/or not included into the tour price
2. Single accommodation supplement (25 USD)
4. Visa support and registration on the territory of Kazakhstan, if required
5. All personal and other expenses 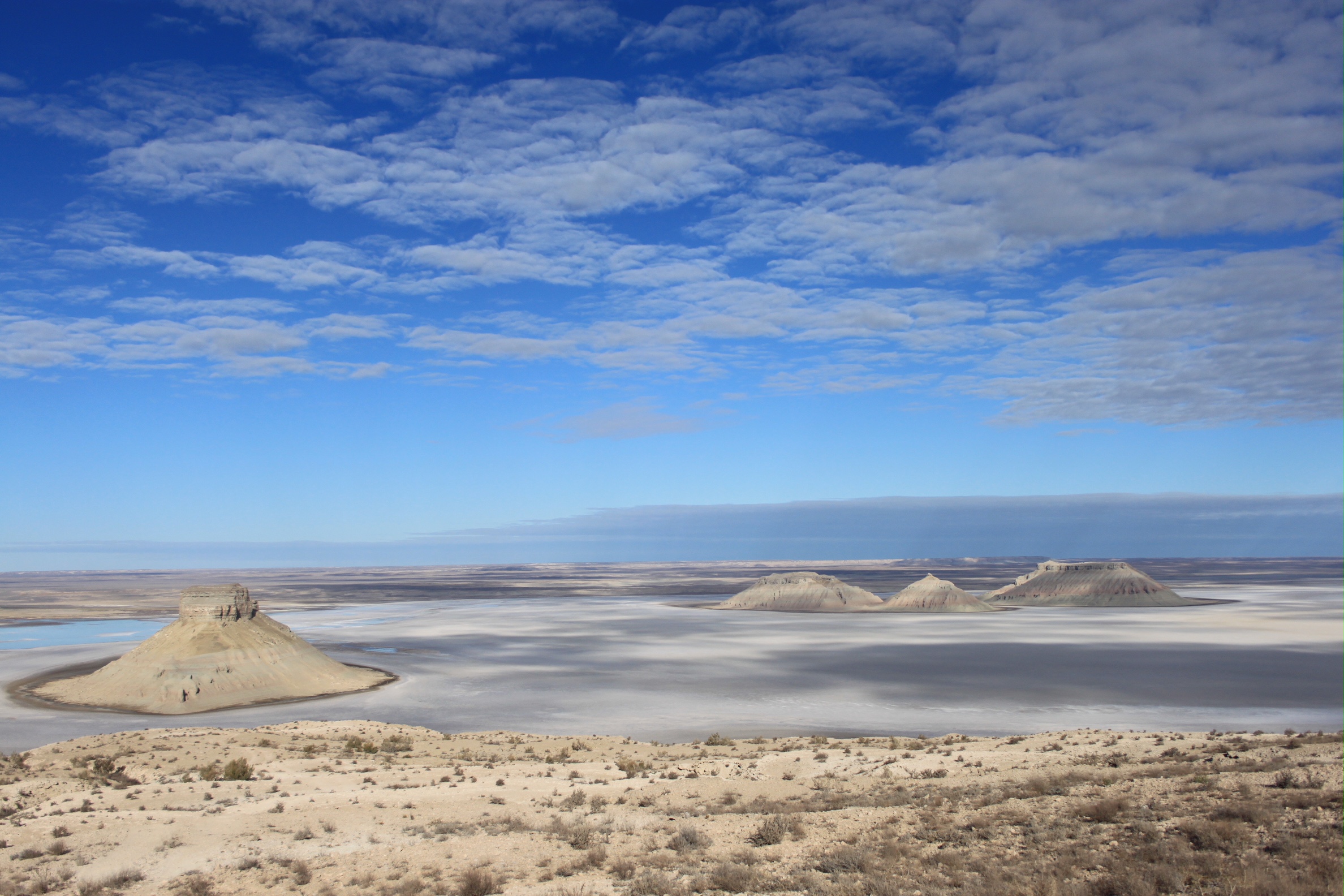